PETALING JAYA: Perak fell short in their bid to qualify for the AFC Cup but coach Mehmet Durakovic is full of praise for his boys.

The Seladang were edged 3-2 by Kedah in their final Super League clash at the Perak Stadium in Ipoh last week. The loss also saw them slip from third to fourth in the 12-team standings.

“My players gave everything and I’m very proud of them. For 95 minutes they ran, chased and fought. We had so many chances and to be honest, that third goal killed us, ” said Durakovic.

“Coming back from two goals down wasn’t easy against Kedah. But at the end of the day, congratulations to our opponents who won and we didn’t.

“To have two key players missing made our bid to qualify more difficult. Shahrul is a fantastic player and you can see that when he performs for Perak and Malaysia.

“De Paula’s presence was also sorely missed. But the players that came on for them did a very good job, I cannot ask for anything more from them. They all gave 100%.

“Many don’t know but Shahrel played despite an injury. He knows we need his help and you can see his commitment towards the team.

“He’s been fantastic all year and it’s not easy for a local player to be up there among the top goalscorers. If he had been injury-free, he might have scored one or two goals.”

Durakovic also pointed out that Perak had done well despite losing key players in Brendan Gan and Nor Hakim Hassan.

“If you look back at the start of the season and saw that we had lost a couple of top players, you would have thought we would end up sixth or seventh.

“Anyway, we would have loved to go to Asia. We tasted that last year and it was a great experience for the players but at the end of the day, experience counts. If you look at Kedah, all their players are very experienced and they’ve got a big squad.” 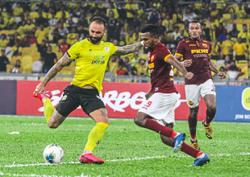