Alderweireld out for up to four weeks, says Spurs boss Mourinho

PETALING JAYA: Terengganu are ready to pile on more misery on relegation battlers Felda United in their Super League clash at the Tun Abdul Razak Stadium in Jengka tonight.

Their coach Nafuzi Zain is looking to improve on their fifth placing with two matches remaining.

The east coast side have collected 13 points from nine matches and bagging six points beginning with today’s match would put them in the top-three position.

Their last match will be at home against sixth placed Pahang on Oct 10.

“We have to admit the title race is over but that doesn’t mean our season is over. For us, there’s still plenty to play for,” said Nafuzi.

“I know the players can achieve it as we have the quality to do it. We should not give up just because we can’t win the league.”

Terengganu bounced back from three straight defeats to beat bottom side Police 4-0 which saw the cops relegated.

But Felda will be a tougher opposition as they welcome back influential skipper Jasazrin Jamaluddin while Nafuzi’s squad are plagued with injuries.

Midfielder Nasir Basharudin and defender Hafizal Mohamad will be missing while striker Dominique Da Sylva and defender Babacar Diallo will have to undergo a late fitness test.

“Injuries have been a problem this season but the good thing is morale is high after ending our losing streak.

“We are on a good stead and I want the team to continue the momentum to win these two matches and finish as high as possible.” 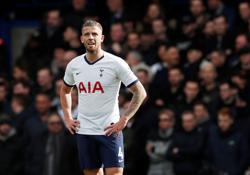 Alderweireld out for up to four weeks, says Spurs boss Mourinho