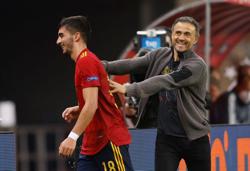 Mali call up Doucoure and Adama Traore for friendly internationals

MADRID (Reuters) - Wolverhampton Wanderers winger Adama Traore was named in the Spain squad by coach Luis Enrique on Friday, three days after also being called up by Mali.

Traore, who was born in Barcelona to Malian parents, has been at the centre of a tug-of-war between the two federations over the past 18 months.

He can still represent either nation as he has not yet played senior international football.

The winger was selected for last month's fixtures against Germany and Ukraine, but was forced to withdraw from the squad following a positive COVID-19 test.

"Touch wood he can play this time as it's his third call-up," Enrique said when asked about Traore.

"I really want to see him in a Spain shirt. Regarding the call-up he's received from Mali, it's up to him. As far as I'm aware, he wants to play for us, but it's his decision and we'll always respect players' decisions on these things."

Traore has made no public statement on the double call-up, although football analysts expect him to go with Spain.

There have been several cases recently of African countries calling up high profile European-based players, who have dual nationality, without prior consultation and then being embarrassed when they have failed to turn up.

There was also a recall in the Spanish squad for Arsenal's on-loan midfielder Dani Ceballos, while under-fire Chelsea goalkeeper Kepa Arrizabalaga retains his spot in the squad.

But there was no room for Atletico Madrid's Saul Niguez or Real Madrid midfielder Isco, while Liverpool new boy Thiago Alcantara was absent after testing positive for COVID-19. 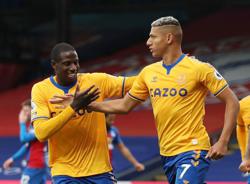 Mali call up Doucoure and Adama Traore for friendly internationals