(Reuters) - The Premier League said on Monday that 10 people had returned positive results in its latest round of COVID-19 tests conducted on players and staff last week, the highest number of cases in a single round since the new season began this month.

The league said the individuals who had tested positive for the virus would now self-isolate for 10 days.

"The Premier League can today confirm that between Monday 21 September and Sunday 27 September, 1,595 players and club staff were tested for COVID-19. Of these, there were 10 new positive tests," the Premier League said in a statement https://www.premierleague.com/news/1814863.

A total of 20 people have tested positive for the novel coronavirus in four rounds of testing since the new campaign began on Sept. 12.

(Reporting by Manasi Pathak in Chennai; editing by Clare Fallon) 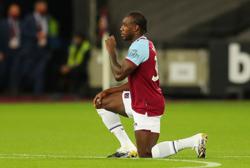 Antonio out of West Ham's trip to Liverpool with hamstring issue

Can the Hammers take advantage at Anfield?