Pride at stake for Red Giants

Full steam ahead: Selangor skipper Sandro Mendonca (right) says they have to give their all against UiTM, Police and Felda United.

PETALING JAYA: Selangor led by Sandro Mendonca want to put a tumultuous Super League season behind them and go all out for a win against UiTM at the UiTM Stadium tomorrow.

Their coach B. Sathianathan has been terminated following poor results.

On Saturday, they were thrashed 6-1 by defending champions Johor Darul Ta’zim (JDT) and the latest humiliating loss culminated in the club ending their tie with Sathianathan on Tuesday.

Selangor II’s coach Michael Feichtenbeiner is now the interim coach, and he has been tasked to bring maximum points in their next three matches.

The Red Giants’ Brazilian midfielder Mendonca said the players were feeling guilty over the poor performance against JDT but have vowed to end their season in a dignified manner.

“The last result was unfortunate. Then there was the dismissal of the coach. We all feel guilty,” said the 36-year-old Mendonca.

“We have our honour, our pride and we are professionals. We know we are defending the colours of a great team in Malaysia.

“We have to end the competition with dignity.

“If we can get the Asian spot, great, but right now, what matters most is giving 100 per cent and try to get the best possible finish in the league.”

The top two teams in the league will get to feature in the AFC Cup.

Selangor are currently eighth in the league with 10 points, while UiTM have silenced their critics so far by collecting 13 points to be placed fourth in the league.

The aim for Selangor is to finish in the top two, and Mendonca knows that they have to give their all in the next three games against UiTM, Police and Felda United.

“The new coach has little time to work. He is trying to implement his work philosophy and help the players regain their confidence,” he said.

“UITM are good. They are in a buoyant mood after beating Terengganu and their attack is outstanding too. We have to prepare well and play a great game.”

“Individually, after MCO I have played some good matches.

“I am feeling very well physically but unfortunately some results did not go our way otherwise we would have been in a better position.” 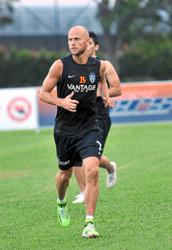