PETALING JAYA: Kedah coach Aidil Sharin is glad that his tactical change made all the difference in their 2-1 comeback win over Felda United in their Super League clash.

Felda took the lead through their 20-year-old Mohd Syahmi Zamri (44th minute) but goals from Tchetche Kipre (48th) and Hadin Azman (66th) saw the Red Eagles claiming the full points at the Tun Abdul Razak Stadium in Jengka on Saturday.

Aidil said his men deserved the win as they showed improvement in the second half.

“It’s always difficult to play at Felda’s home, they have good youngsters and imports but my boys did well and they deserved to win, ” said Aidil.

“We didn’t do well in the first half but we improved in the second. When we were 0-1 down, I brought in Alex (Azamuddin Akil) for Amirul (Hisyam) to bolster our attack.

“I told the players to enjoy the game and take their chances well.

“We played a high pressing game against our younger opponents. And our tactical change worked.”

The win propelled Kedah from fifth in the 12-team standings to second with 13 points, six points behind leaders Johor Darul Ta’zim after seven matches.

Felda remain in ninth spot with six points and are fast becoming a relegation candidate.

The Fighters’ coach Nidzam Jamil said his side needed to regroup and bounce back in their remaining four matches.

“If you don’t concentrate you will be punished in football, we are playing at the top level and shouldn’t be committing these mistakes, ” said Nidzam.

“Kedah are among the football giants in the country but I believe that we had the quality to get a point in this game.

“The good thing is that our youngsters are stepping up, Syahmi scored in this game and we gave our 18-year-old Norazwan Amir his debut.”

Sun, sand and sea – but it’s not all fun for Kedah 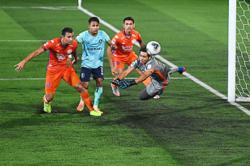 Coach tells Fighters to up the ante in the Malaysia Cup