(Reuters) - The loss of two key strikers would end the hopes of many teams, but with their vast array of attacking talent Olympique Lyonnais still managed to beat Wolfsburg and win a record fifth consecutive Champions League title on Sunday.

The French champions lost former Ballon d'Or winner Ada Hegerberg to a knee injury earlier in the season, and a red card for Nikita Parris in the semifinal against Paris St Germain saw her suspended for the final against the German champions.

"People said it was the best time to play us because we were missing so many players, but we were the best side in the first half by a long shot, and the game was almost finished at halftime," Lyon defender Lucy Bronze said following the 3-1 win.

"We've definitely got the strongest squad in the world."

Lyon were able to call on experienced forward Eugenie Le Sommer to replace Parris, and she notched a goal and assist to allow captain Wendie Renard to lift the trophy in San Sebastian once again.

It was the seventh time that French international team mates Le Sommer, Renard and goalkeeper Sarah Bouhaddi have been crowned club champions of Europe.

"It's actually quite difficult to believe we have managed our fifth straight title, to be honest. We're super proud of ourselves, it was a very difficult competition ... if you sign for Lyon, you sign up to be a winner," Bouhaddi said.

Despite Wolfsburg's best efforts, there is little to suggest that any other European club can knock Lyon off their perch, and Renard intends to enjoy the club's success. 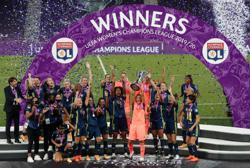 Lyon and PSG through to semi-finals in Women's Champions League