Ronaldinho flies home to Brazil after Paraguayan judge frees him Ronaldinho left the hotel where he had been staying since April in the capital, Asuncion, for Rio de Janeiro on a private flight with his brother Roberto, Paraguayan authorities said.

Hours beforehand on his Instagram account, he thanked his Brazilian lawyer and the team of professionals who advised him in Paraguay, as well as some fans who gave him gifts. He also published a photo with the former defender of the Paraguayan team, Carlos Gamarra.

The departure closes a turbulent chapter in the life of the charismatic striker, who helped Brazil win the 2002 World Cup. He was arrested on March 6 with his brother and business manager Roberto Assis when they tried to enter Paraguay with adulterated Paraguayan passports. They spent 32 days held in a police station along with drug traffickers, policemen and corrupt politicians before paying $1.6 million in bail to be detained instead in a hotel.

Judge Gustavo Amarilla on Monday agreed to a "conditional suspension" of charges, effectively clearing the player of any responsibility for the crime. But he ordered him to pay $90,000 in costs, which would be given to charitable organizations.

Ronaldinho's brother received a suspended two-year sentence after the judge found he requested the fraudulent documents.

The judge said that Ronaldinho, 40, who also played for PSG and AC Milan, could move freely around the world and only had to notify the court if he changed his fixed address in Rio de Janeiro. 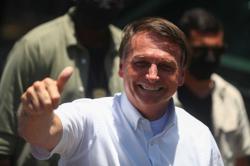