Injured Bryan banking on Willfred to keep cops up

Police goalkeeper Bryan See is out injured and leaves his team in a spot in the relegation battle. - GLENN GUAN/The Star

PETALING JAYA: Police can’t seem to catch a break in the Super League.

Their luckless run continued with a recent setback that will see them losing their first choice goalkeeper Bryan See as he is out for six to eight weeks due to a hamstring injury picked up last week.

The Cops have already lost Grenadian striker Antonio German, who has gone AWOL since March. And earlier in February, they were also docked three points by the Football Association of Malaysia (FAM) for their failure to settle the wages owed to players from last season.

Police are currently lying at the bottom position in the 12-team standings with a deficit of two points after four games.

The team had been banking on Bryan to escape relegation but it looks rather tricky now.

“It has been a week since I got injured during training. I’ve a grade two tear in one of my hamstring muscles and I’m expected to be out for six to eight weeks, ” said the 26-year-old.

“I’m still optimistic of making a comeback this season. I can either rush the recovery process but may end up making the injury worse or go through a full recovery and return towards the end of the season.

“I hope to feature in the last three matches. I still believe the team have a chance to escape relegation.”

If Bryan is unable to make it, he says Police have an able replacement in seasoned Willfred Jabun.

“We need to be positive, I see this situation as a chance for our reserve goalkeeper Wilfried to step up. He is a good player and played in the M-League before, ” said Bryan.

The Cops will resume their Super League campaign against Kedah on Aug 26. Their other matches are against Felda United (Sept 2), Pahang (Sept 6), Perak (Sept 10), Terengganu (Sept 13), Selangor (Sept 19) and Petaling Jaya City (Sept 22). 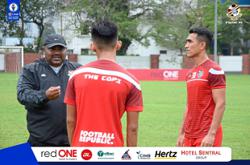 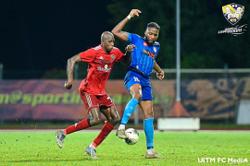