RIO DE JANEIRO (Reuters) - A plan to allow supporters back into football matches in Rio de Janeiro from July 10 could be canceled if authorities cannot guarantee the safety of fans and officials, the city's mayor said on Tuesday.

Rio is the only state to restart its league so far in Brazil, with seven games taking place over the last 12 days behind closed doors.

However, a plan to sell tickets for a third of the seats in stadiums such as the Maracana was called into question by Mayor Marcelo Crivella – even though he sanctioned the plan for the Rio de Janeiro state championship matches last week.

"It's not guaranteed that there will be fans on the 10th," Crivella said. "We're analyzing it, asking the police for their help to verify whether we can really guarantee whether every fan is wearing a mask and that there won't be crowds on public transport."

Many countries have resumed the football competitions they suspended in March but almost all games have been played behind closed doors to prevent transmission of the COVID-19 disease.

The COVID-19 death toll in Rio de Janeiro state surpassed 10,000 people on Tuesday, 6,550 of them in the eponymous state capital where the four biggest clubs are based.

All told, some 1,280 COVID-19 deaths were reported in Brazil on Tuesday, taking the nationwide death toll to 59,594, more than any other nation except the United States.

In spite of the numbers, Rio will this week allow more businesses to open, including bars, restaurants and gyms. 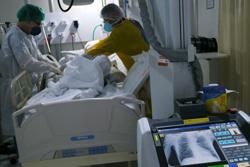