(Reuters) - Manchester City defender Eric Garcia has been released from hospital after he was injured in a collision with goalkeeper Ederson in their 3-0 win against Arsenal, the Premier League club said on Thursday.

Garcia, 19, collided with the Brazilian goalkeeper late in Wednesday's game and received treatment for several minutes before being carried off on a stretcher and taken to the Manchester Royal Infirmary Hospital for further tests.

"Garcia has been released from hospital... He will be monitored in the coming days, ahead of a return to training and competitive action," City said in a statement. "Everyone at the club wishes him a speedy recovery."

Ederson, 26, on Thursday posted a picture of himself and Spain's Garcia on Twitter captioned "well and back".

Goals from Raheem Sterling, Kevin De Bruyne and Phil Foden guided City to a comfortable win on their league return, cutting the gap to league-leaders Liverpool to 22 points. 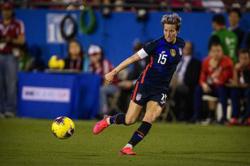