Dortmund not in holiday mode despite shock loss - Favre

BERLIN (Reuters) - Borussia Dortmund will need to dig deep for motivation on Saturday when they take on RB Leipzig, who are looking to sew up their Champions League spot for next season and snatch second place from the Ruhr valley club.

Dortmund, already certain of a top-four finish, have played a fine second half of the season but their shock 2-0 loss on Wednesday to relegation-threatened visitors Mainz 05 has put second spot in doubt.

Dortmund sports director Michael Zorc had warned before the game on Wednesday that they wanted to "reinforce the fact that we are the number two in Germany football" but they looked more like a lower table club than second best in the Bundesliga.

"We played as if some of us were already on holiday," Zorc fumed after the defeat left Dortmund on 66 points, three ahead of Leipzig.

When asked if his players had already decided they were finished with the season, coach Lucien Favre said: "I hope not.

"We understand that it has been a long season, a month and a half longer due to the current conditions. You may think it is a bit like in school where you say there is only one week left. That is not the case with us. We give 100% at every game."

Leipzig handed Dortmund a huge gift on Tuesday when they conceded twice late in the game to draw 2-2 against relegation-threatened Fortuna Duesseldorf.

Bayern Munich, who sealed the league title on Tuesday with a win at Werder Bremen, host Freiburg, who still have a chance of a Europa League place.

Battling for the last Champions League spot, Bayer Leverkusen in fourth on 60 points, travel to Hertha Berlin while Borussia Moenchengladbach, fifth on 59, take on relegated Paderborn.

Former champions Werder, in 17th and a point off the relegation playoff spot, face Mainz, who only need a point to reach safety. 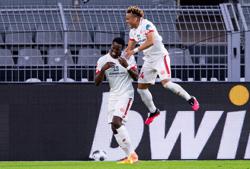 Mainz stun Dortmund to all but secure Bundesliga survival

Trabzonspor to miss out on Champions League after appeal dismissed