No sob story over SOPs

PETALING JAYA: The M-League teams’ lackadaisical attitude over the standard operating procedures (SOP) for non-contact training could cost them dearly.

That is the Malaysian Football League’s (MFL) warning to all the teams after most of them have yet to get the approval to begin training.

The government has allowed football training to resume from Monday onwards. However, the MFL said non-compliance to the strict SOPs could see the training permission revoked by the National Security Council (NSC).

Under the new SOPs, M-League teams are required to conduct swab tests for Covid-19 and submit the results to the Malaysian Football League (MFL).

They also have to appoint an official to coordinate and monitor the SOPs, name a closed training venue and register the venue with the Ministry of International Trade and Industry (MITI).

MFL chief executive officer Datuk Abdul Ghani Hassan (pic) said there was no need for the teams to rush to start training early and end up jeopardising safety and affect their plans to restart in the M-League in September.

“We had a teleconference with all the M-League teams last week to explain what they needed to do to restart training.

“Although the government has allowed training to start on June 15, I believe the M-League teams need more time to get the approval,” said Abdul Ghani.

“The teams should not be too excited to start training and end up overlooking the four criteria we have set. If we are not careful, we can end up starting a football cluster for Covid-19 and the government might revoke the permission to start training.

“We need everyone to be honest and responsible because this is a matter of health. There’s no harm in starting the training later as the M-League will only begin in September.”

Yesterday, Negri Sembilan became the first M-League team to get the approval to begin

NSFA secretary Satwant Singh said their players were eager to train after three months of inactivity.

“This is the first gear for training and we must abide by all the SOPs so we won’t have a football cluster,” said Satwant.

“Maybe we will do another swab test when the competition is about to start to make sure everyone is free from the virus.

“We will have 10 players and four officials at one time in training. There will be no meet-up among them and they will enter and exit the Tunku Abdul Rahman Stadium in Paroi where they will train.” 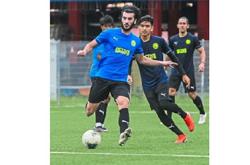