Liverpool will not ease up after sealing title: Klopp

(Reuters) - Liverpool will not ease up in their nine remaining Premier League games even after they secure the wins they need to seal a first top-flight crown in 30 years, manager Juergen Klopp said.

The club have a 25-point lead over second-placed Manchester City as the Premier League prepares to resume this month following the COVID-19 disruption.

Liverpool can also secure the title with a win against Everton in their first match back if City lose to Arsenal when the league restarts on June 17.

"It's nice to think about it but we are not champions yet and we know that," Klopp told the BBC. "We know we're close but close is not there. There are 27 points left for us and we will try everything to take them all.

"We don't want to stop winning after two games ..."

The league was suspended on March 13 due to the pandemic, with teams returning to training in small groups before voting last week to return to contact training.

"I have missed it so much it's unbelievable," Klopp added.

"I know it's not the most important thing in life but it is my passion. I hope the people are looking forward to it because we are." 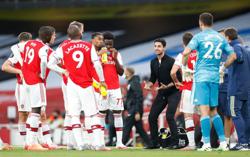