Hosting major sporting events has its benefits to a country DOHA: Is it worth the money to host major sporting events?

Qatar’s 2022 World Cup chief operating officer (CEO) Nasser Al Khater believes so and in fact, he even encourages other Asian nations like Malaysia to think about hosting it in future.

He said organising the World Cup or other multi-sport Games such as the Asian Games and the Olympics will fast-track the country’s sports, economic and social development programmes and raise the profile

Although the organisational cost is high, Nasser said it would still benefit a nation in the long run.

“Events like this help nations to focus on delivering success – not just in a sporting sense, but also in the developmental aspects,” said Nasser.

Malaysia have hosted the SEA Games six times and the Commonwealth Games once in 1998.

They were close to hosting the 2006 Asian Games, but ironically Kuala Lumpur lost the bid to Doha.

Nasser said Qatar is already enjoying progress since winning the bid to host the World Cup and launching the 2030 National Vision in 2008.

Under the 2030 plan, its aim is to transform Qatar into an advanced society.

Nasser said it is good that the biggest tournament in football is speeding up the vision’s process and the aim of it is to ensure the Qatari public can savour the benefits of sustainable development.

“Hosting the World Cup is speeding up the vision’s process. We are looking at infrastructure, environment, human capital and workers rights,” he said.

“Legislation has been put in place to protect workers and their rights. And our people are pleased with all these progress.

“New highways are being built. The metro will be fully operational. All will be completed by 2020.”

Nasser added: “We promise the most environmentally friendly World Cup. We will depend on the metro to reduce carbon emissions, and we are also looking at electric buses.” 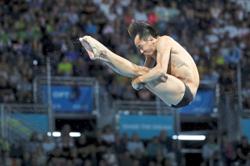