The future is at Kogi’s feet

Kogileswaran Raj was one of three players named as 'Most Valuable Player' out of 60 participants at the Nike All Asia Football Camp at the Aspire Dome in Doha recently. - Filepic

Like every football-loving child around the world, he dreamed of representing the country and even playing in Europe one day.

But, Kogileswaran had one thing most other boys kicking the ball around in the Malaysian playground did not have – talent.

Nine years ago, at the age of six, he started pursuing his football dreams when his father enrolled him at the Royal Selangor Club (RSC). He began to show promise after two years when he scored 28 goals in an Under-10 tournament organised by the club.

In those early years, Kogileswaran got a chance to train with his mentor Titus James Palani, who is currently playing with Nanteuil FC in the French Third Division, at the Kilat Club in Bangsar.

He also played for the Youth Football Academy (YFA), who emerged champions in the 1MCC Under-14 competition in 2012.

Today, Kogileswaran is one of the exciting talents in the Harimau Muda Under-16 football squad.

The squad is in the midst of preparing for the AFC Under-16 Finals in Bangkok in September to qualify for the Under-17 World Cup in Chile next year.

A big fan of Scholes, the Kuala Lumpur lad likes to emulate the playing style of his idol - in the delivery of passes, ball-winning techniques and, more importantly, the aggression in central midfield.

Kogileswaran’s commanding qualities on the pitch have not gone unnoticed.

He was one of three players named as “Most Valuable Player” out of 60 participants at the Nike All Asia Football Camp at the Aspire Dome in Doha recently.

The international training camp, from Feb 9-15, was an elite academy programme for young Asian footballers to train with renowned European coaches and demonstrate their skills to delegations from Manchester United, Barcelona and Inter Milan.

The camp represented some of the world’s finest teenage players from 11 nations across the region and Kogileswaran was handpicked to receive the MVP by Brian McClair, Manchester United’s Academy Director and former striker.

The climax of the camp saw the best players go up against each other in a match between “Rest of the World” and Europe.

Kogisleswaran featured for the Rest of the World and scored the winner in the game (2-1).

Harimau Muda Under-16 coach S. Balachandran, who attended the camp, said Kogileswaran has a good future if he continues working hard to pursue his dreams.

“The game is the same all over the world ... it is just how one prepares for it,” said Balachandran.

Kogileswaran, 15, is now studying at the Pahang Sports School in Gambang.

He believes he has picked up a lot since moving to the sports school two years ago and training under Balachandran.

“I have a dream and I aim to reach the top. I want to play in the World Cup Finals one day.

“For now, we are trying to qualify on merit for the Under-17 World Cup. We have been drawn with hosts Thailand, South Korea and Oman in the Asian Finals in Bangkok. Our mission is to qualify to Chile next year,” he said.

The Malaysian boys made heads turn when they emerged as the Asean Under-15 champions to qualify for the AFC Under-16 Finals. They finished top in the qualifying rounds, which included a 2-0 win over favourites South Korea.

Although Kogileswaran plays in an attacking midfield position, he has scored a total of 10 goals at both those Asian meets.

“I love to score goals just like Scholes,” said Kogileswaran with a big smile on his face.

On his future, Kogileswaran said he wants to keep in touch with Titus.

“Titus has been a source of inspiration to me. I look up to him and go to him for advice and career opportunities. Although he is in France, we are in contact all the time,” said Kogileswaran, who is currently playing in the Asian Champions Trophy Tournament hosted by Frenz United. 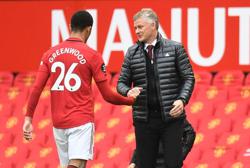