BIRMINGHAM: It is unlikely that the diving team can contribute a gold to the Malaysian contingent in Birmingham over the next two days.

On Saturday (August 6), Pandelela Rinong-Nur Dhabitah Sabri's hopes of defending the gold won in the women's 10m platform synchro event in Gold Coast, Australia four years ago fizzled out after only earning 41.28 for their fourth dive.

As a result, the Malaysian pair slipped from second position to sixth. Pandelela-Nur Dhabitah came back with 75.84 but the damage was done as they eventually had to settle for fourth with 286.92 points.

It was England's Eden Cheng-Andrea Spendolini Sirieix who pushed the Malaysians out of the podium by grabbing silver with their last dive, earning 76.80 to finish with 298.86 points.

Another English pair Robyn Birch-Emily Martin got the bronze with 287.88 points.

Melissa partnered Alexandra Croak to be the last Australian gold medallists in New Delhi back in 2010.

It is the first time Pandelela fails to win a medal in the 10m platform synchro at the Commonwealth Games.

Pandelela took silver in the event with Leong Mun Yee in 2010 and got the bronze with Nur Dhabitah in Glasgow four years later. She made the top of the podium in Gold Coast with Cheong Jun Hoong. 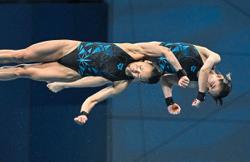 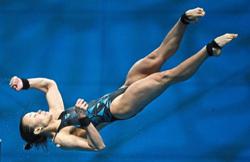