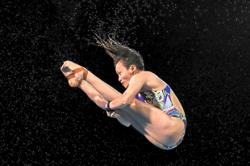 Jun Hoong’s entry for the women’s individual 10m platform could see her up going up against teammates Pandelela Rinong and Australia’s Olympic medallist Melissa Wu, the reigning Commonwealth Games champion.

It will be the first competition in two years for Jun Hoong since she went under the knife because of a torn knee ligament in 2018.

She had hopes of making her comeback in April to secure an Olympics spot through the World Cup meet in Tokyo and even went to China to train under former national coach Yang Zhuliang but the Covid-19 pandemic turned everything upside down.

Fortunately, Zhuliang followed Jun Hoong back to Malaysia and has been guiding her under the Road to Tokyo special training camp in Bukit Jalil since June.

Jun Hoong bagged an Olympic silver medal with Pandelela Rinong in the women’s 10m platform synchro in Rio de Janeiro four years ago but is likely to focus only on the individual event this time.

Jun Hoong initially did not plan to compete but Malaysia Swimming secretary Mae Chen said it would be a tricky situation for her to head to the World Cup meet, which has been postponed to April next year, without any competition.

“We used to have the Grand Prix meets at the start of the year but now all have been pushed back to May after the World Cup meet because of the Covid-19 situation, ” said Mae.

“All the divers want to qualify for the Tokyo Olympics through the World Cup meet, so this is why we are going through the trouble to organise this meet.

All the Malaysian divers are taking part except for Jellson Jabillin, and diving coach Christian Brooker expects a quality showing.

“The women’s field are actually pretty strong as we have good divers from Japan while Australia are sending divers like Melissa and Esther Qin (a two-time Commonwealth Games springboard gold medallist), ” said Brooker.

The participants will compete in their own respective training pools and will be judged by five FINA certified judges, who will be sitting at their respective homes and judging from the live streaming through a special app. Looking back to go ahead
Viable for Mas to dive in online again
Promoted divers hope to make immediate impact
Can’t wait for a dip
A spring in diver’s step
No Xmas holiday at home for Pandelela as she’s focused on Olympics
No splash, but Jun Hoong making progress, says coach
Wendy rules pool
Tze Liang and Wendy-Dhabitah grab wins in online competition
Online diving meet costing thousands, but it’s worth it