Let’s jive before the dive

Like the Indians who celebrated Deepavali on Saturday, the two women divers had good reasons to rejoice as well.

The duo, who are the nation’s strongest bet for a medal in the forthcoming Tokyo Olympics, were assured of a place in the prestigious Diving World Series next year.

FINA, the governing body for aquatics, have set up the 2021 calendar for the world series and the criteria for qualification.

The field will be determined from the performance at the last World Aquatics Championships in Gwangju, South Korea, last year.

The series is only for the top eight ranked divers in the individual and synchro discipline from the world meet.

If performances at the world meet in Budapest are taken into account, Pandelela-Mun Yee are sure bets to make the cut based on their silver medal placing in the women’s 10m platform synchro.

Their silver effort also guaranteed the nation a ticket in the women’s 10m platform synchro event at the Tokyo Olympics next year.

Pandelela will also line up for double duty by taking part in the women’s individual 10m platform in the series as she finished fifth in the world championships at that time.

And Malaysia may have additional representation if Tokyo-bound Olympics diver Wendy Ng Yan Yee gets in.

Wendy finished ninth in the women’s individual 3m springboard at the world meet and will make the top eight cut if any of the divers ranked above her decides to skip the world series.

Diving powerhouse China will be hosting two legs (Zhuhai – Feb 26-28) and (Xian – March 5-7) of the prestigious meet for the first time. Kazan, Russia will be the third stop from March 19-21 before the series conclude with the final leg in Montreal, Canada, from March 26-28.

Malaysia Swimming (MS) secretary Mae Chen is keeping her fingers crossed that the series will proceed as scheduled.

“We hope the Covid-19 situation will be under control worldwide so that the sporting world can return to normal.

“Nobody knows the situation yet but we hope the divers will have some competition under their belts before the Tokyo Olympics in August.

“We can only prepare them and wait for the go-ahead to compete again, ” said Mae.

Covid-19 disrupted the running of the world series early this year with Montreal hosting the only competition while three other events in Shanghai, Kazan and London were called off.

In Montreal, Pandelela-Mun Yee claimed a silver in the women’s 10m platform synchro and Pandelela earned a second medal – a bronze – in the individual platform the following day. 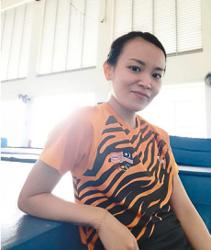 To quit or not is the dilemma faced by Jun Hoong after losing Olympics berth
Heartache as diver Jun Hoong misses cut for Olympics
Don't give up, Sports Minister tells diver Jun Hoong
Queue on the platform
Diver Wendy draws on art to stay calm in trying times
Diver moves on to other targets after missing Olympics ticket
NSC to probe plummeting standard in diving
Hail Tokyo for successfully hosting World Cup under trying times
Rivals seem to have overtaken stagnant Malaysia in diving
Olympics-Organisers hail diving World Cup after anti-COVID measures