New partner, new hope: Kimberly Bong may be paired up with Pandelela Rinong at the World Aquatics Championships in Gwangju, South Korea in July.

PETALING JAYA: Junior diver Kimberly Bong may become the new partner for Pandelela Rinong to make an early bid to claim an Olympic ticket for Malaysia for the women’s 10m platform synchro event at the World Aquatics Championships in Gwangju, South Korea in July.

But if the coaches think the 17-year-old is not up to the mark, Pandelela may be asked to resume her old partnership with veteran Leong Mun Yee.

The duo took silver at the Olympics in Rio de Janeiro in 2016 and were also the Commonwealth Games gold medallists in Gold Coast last year.

Jun Hoong, however, is skipping the world meet this time as she is still recovering from a knee operation.

Kimberly, Pandelela and Ooi Tze Liang left with coach Li Rui for a month long training stint in China on Monday to prepare for the world meet.

Amateur Swimming Union of Malaysia secretary Mae Chen revealed that Kimberly will learn new difficulties to get her ready for her world meet debut.

But it will be too taxing for Dhabitah as she has to focus on the women’s 3m springboard individual and synchro where she is likely to partner Wendy Ng Yan Yee.

Dhabitah claimed a bronze medal in the 3m springboard individual at the final leg of the series in London earlier this month.

“We see her (Kimberly) as an option to pair up with Pandelela for the 10m platform synchro,” said Mae.

“She will be training a new dive in the China training stint. It will be up to coach Li Rui to see whether Pandelela and Kimberly are comfortable with each other.

“It all depends on the training there. Who knows, Pandelela may also dive with Mun Yee again,” she said.

Pandelela is also comfortable with Mun Yee as it was at the 2009 world meet in Rome where they combined to take bronze in the women’s 10m platform synchro. It was the nation’s first world championships medal.

Pandelela-Mun Yee snatched another bronze in the event at the 2013 world meet in Barcelona.

At the world meet in Gwangju, the top three pairs in the synchro events will make the early cut for the Olympics. The top 12 finalists in the individual events will also qualify first for Tokyo. 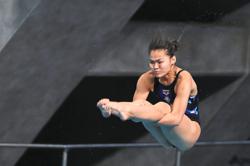