No Uni Games for Malaysia’s top divers this year

PETALING JAYA: Malaysia will have to make do without their top divers, including London Olympic bronze medallist Pandelela Rinong, in the World University Games (Universiade) in Gwangju, South Korea from July 3-14.

Diving head coach Yang Zhuliang do not want to release them as the Games are too close to the World Championships in Kazan from July 14-Aug 9.

For Zhuliang, the divers’ priority should be the Kazan meet, which is not only the biggest event in the international aquatic calendar for the year but also the first of two qualifiers for the Rio Olympics in 2016.

The top 12 diver for the individual and the top three pair in the synchro will book Olympic tickets while those who failed will get another shot the following year at the World Cup in Brazil.

“They believe diving have the brightest chance of winning medals at the Universiade.

“It’s not just Pandelela but Jun Hoong is also a strong contender as she won the 3m springboard individual in the World Grand Prix leg in Singapore last year.

“But their priority should be the World Championships because they have good chances to book an early spot to the Olympics in Kazan.

“It is important for our divers to make it to the top 12 in their respective individual events and we have a chance in the women’s synchro also (3m springboard and 10m platform).

“If they were to go for both competitions it would be too taxing for them.

“We can release Kam Ling Kar, Jasmine Lai and Traisy Vivien Tukiet to represent the country.”

In the 2011 Universiade in Shenzhen, China, diving contributed all three medals for Malaysia.

Pandelela made history by becoming the first Malaysian diver to win a medal by snatching the silver in the women’s 10m platform individual.

She also won a bronze with Leong Mun Yee in the synchro event. They picked up another bronze as the third best overall team in the women’s events. 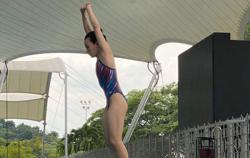