(Reuters) -Ducati's Francesco Bagnaia won his maiden MotoGP world championship at the season-ending Valencia Grand Prix on Sunday after Fabio Quartararo failed to overhaul him in the standings.

Defending champion Quartararo was 23 points behind Bagnaia going into the final race. The Yamaha rider needed nothing less than a victory to leapfrog the Italian but finished fourth in a race won by Suzuki's Alex Rins.

Despite an early collision, Bagnaia finished ninth, enough to retain his lead in the championship and give Ducati their first title since Casey Stoner won it in 2007, ending 15 years of dominance by Japanese manufacturers.

"The hardest race of my life! My mission was to be in the top five... but I started to struggle after three-four laps, the front of my bike was impossible to control," Bagnaia said.

"But the most important thing is we won... we are world champions. It's a really great day."

His title marked the greatest comeback in MotoGP history as he was 91 points down midway through the season and it ended a 50-year wait for an Italian rider to win the championship on an Italian bike after the great Giacomo Agostini.

He also became the first Italian to win the MotoGP title since Valentino Rossi was last crowned champion in 2009 with Yamaha.

Bagnaia celebrated by waving the Italian flag as Ducati presented him with a golden helmet, the visibly emotional 25-year-old taking a moment to compose himself before raising it in the air in celebration.

Rins had the perfect start to take the lead from pole sitter Jorge Martin into turn one while Quartararo's title hopes slipped through his grasp as Bagnaia moved up the grid from eighth to battle the Yamaha rider for fifth.

The two title contenders were involved in an intense, no-holds-barred battle early on and even collided while jostling for position which resulted in damage to the front of Bagnaia's bike.

Bagnaia looked to be struggling after the collision and decided to hang back and avoid any risk, knowing he would be crowned champion as long as he finished in the top 14 even if Quartararo won the race.

Honda's Marc Marquez started second on the grid and looked set for a podium but crashed on turn eight with 18 laps to go, ending Honda's season after team mate Pol Espargaro crashed earlier.

Bagnaia's team mate Jack Miller battled for third place in his final race for Ducati but the Australian lost his grip to crash out soon after conceding his position to KTM's Brad Binder, who also overtook Martin to move up to second.

But there was no stopping Rins who took the chequered flag in his final race for Suzuki as the Japanese team, which is being disbanded, signed off from MotoGP with a victory.

(Reporting by Rohith Nair in Bengaluru,Editing by David Goodman and Ed Osmond) 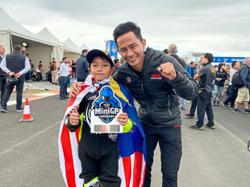