PARIS (Reuters) -The 2023 Tour de France riders are set for a gruelling final block of racing on a treacherous course that will go through all five mountain ranges.

With a start from Bilbao, Spain, the peloton will quickly be in the Pyrenees with a mountaintop finish at the iconic Col du Tourmalet before heading to the Massif Central to end up at the top of the Puy de Dome for the first time since 1988.

The Jura and the Alps will feature three consecutive mountain treks before a rest day, a short but brutal individual time trial and a ride to Courchevel with 5,100 metres of altitude gain.

"They will get to the bottom of the Col de la Loze (the last climb before heading down to Courchevel) really knackered. The riders will need to keep a bit of freshness to be alert on the tricky descent," said Tour sporting director Thierry Gouvenou.

The Tour might then be decided in the penultimate stage to the Markstein in the Vosges, where the women's Tour ended up last year.

"We're looking to make the most of the mountain ranges in the country and a start from the Basque country made that possible," Tour de France director Christian Prudhomme said.

With only 22 kilometres of time trialling, the pure climbers will obviously be favoured.

"You can never know what will happen. There's what we imagine and the scenarios we would like to see, but sometimes we get something totally different," said Prudhomme.

"I really like the route, it's going to be a hard race from the start with a tough week in the Basque country," said 2020 and 2021 champion Tadej Pogacar.

"It has a lot of climbing, which I like, particularly the first and third weeks."

In 2022, then defending champion Pogacar cracked in the ascent to the Col du Granon after the team of eventual winner Jonas Vingegaard threw everything at the Slovenian in a vintage stage, arguably the most spectacular in the century.

There will be several opportunities for sprinters to shine aside from the traditional finish on the Champs Elysees in Paris with stages ending in Bordeaux, Poligny and Nogaro, with Mark Cavendish's presence being the biggest question mark as the Briton looks to break the record of 34 stage wins he shares with Belgian great Eddy Merckx.

The Tour will start on July 1 with its second 'Grand Depart' from the Basque country after setting off from San Sebastian in 1992. 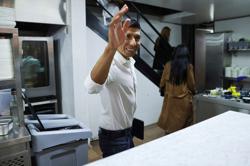