SYDNEY (Reuters) -Remco Evenepoel concluded a magnificent season with a solo breakaway to win the world road race title on Sunday, adding the rainbow jersey to his triumphs in the Vuelta a Espana and the Liege–Bastogne–Liege monument classic.

Two weeks after giving Belgium its first Grand Tour champion in 44 years at the Vuelta, the 22-year-old rider gave his country its first world road race champion in a decade since Philippe Gilbert won in Valkenburg.

Evenepoel rode the last 25km of the 266.9km race on his own, crossing the line with his fists pumping at the beach in the centre of the Australian coastal city of Wollongong in six hours, 16 minutes and eight seconds.

"It's something I've been dreaming of and now after a monument, a big classic, a Grand Tour and now world champion, I think I've won everything I could this year," Evenepoel said.

"I don't think I will ever have a better season than this. I'm not going to see my bed tonight."

Big crowds thronged the streets of the small city south of Sydney, where the riders completed 12 laps of a 17-km loop in the spring sunshine to conclude the race.

They had plenty to cheer early on as Australians Ben O'Connor and Luke Plapp joined a breakaway of 16 riders which built a lead over the peloton of up to seven minutes.

The race favourites were all tucked into the main pack until Evenepoel joined a handful of riders who chased down the breakaway.

The Belgian made his move to the front with 32km to go and rode Kazakh Alexey Lutsenko, the only rider to go with him, off his wheel up a climb 7 km later.

"I felt quite quickly that I was stronger than Alexey and I wanted to go alone because there's no time to waste on a circuit like this," said Evenepoel, who also won a bronze medal in last weekend's time trial.

"The last climb was super hard and my legs exploded but ... it's the world championship, you just want to win the jersey."

Evenepoel shared a hug at the end with compatriot Wout Van Aert, who finished second last year but had to settle for fourth on Sunday after being edged out of the medals in the final sprint.

Frenchman Julian Alaphilippe, who was chasing a third straight title despite dislocating his shoulder at the Vuelta, finished well off the pace some three minutes behind his Quick-Step Alpha Vinyl team mate Evenepoel.

Dutch rider Mathieu van der Poel, one of the favourites, dropped out 30km into the race after being arrested in Sydney and charged with assault on Saturday night. 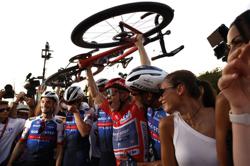