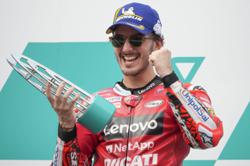 (Reuters) - In-form Francesco Bagnaia set a lap record to lead a Ducati front-row lockout in Aragon Grand Prix qualifying in Alcaniz on Saturday as his title rivals Aleix Espargaro and Fabio Quartararo ended up on the second row.

Honda rider Marc Marquez, a six-times MotoGP champion, finished 13th on his return to racing, after recovering from surgery and missing the last six rounds of the championship.

Suzuki rider Joan Mir withdrew from the Aragon GP weekend after the end of the third practice session earlier on Saturday due to an ankle injury. The 2020 world champion will also sit out next weekend's Japanese GP at Motegi. 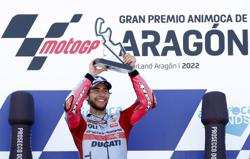