Roglic suffered a dislocated shoulder and a back injury when he crashed in the fifth stage of the Tour de France and abandoned the race before the 15th stage to focus on his recovery.

"We are delighted that Primoz can start in the Vuelta after his serious injury in the Tour de France," Jumbo-Visma's sports director Merijn Zeeman said.

"Logically, he didn't have the best preparation, but we greatly respect him for how he managed to get ready. We have a good and balanced team at the start that can optimally support Primoz in all areas."

Roglic will launch a bid to become the first rider to win the Vuelta a Espana four times in a row when it begins in Utrecht on Aug. 19.

(Reporting by Aadi Nair in Bengaluru; Editing by Christian Radnedge) 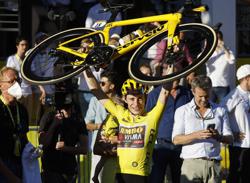