It was the track cycling team's first medal in Birmingham.

The 26-year-old almost got caught in a nasty high speed crash in the second round earlier while he was among four riders jockeying for position.

It was Australian Matt Glaetzer who appeared to have clipped Shah Firdaus's wheel and later knocked into Britain Joe Truman.

The two were left sprawling on the track and needed medical attention.

Glaetzer's bid to defend the keirin title he won in his home Games in Gold Coast four years ago thus came to an end while Shah Firdaus managed to win the second round heat to earn his first final appearance.

In the top six final, Shah Firdaus managed to come out from the pack to snatch a deserving third place behind Scotland's Jack Carlin.

Shah Firdaus was left as the sole Malaysian challenger as his younger brother Ridwan Sahrom and Mohd Fadhil Zonis failed to clear their respective repechage heats.

Shah Firdaus had opened his individual campaign in style by winning his first round heat.

The Malaysian trio will return later for the men's sprint qualifying rounds. 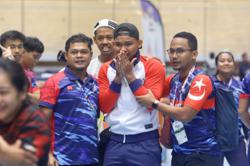