Life goes on: Azizulhasni (centre) may not be in Birmingham for the Commonwealth Games, but he is certainly rooting for Shah Firdaus (right) and Fadhil Zonis (left).

The 34-year-old Tokyo Olympic Games silver medallist, forced to sit out after undergoing corrective heart surgery in May, posted on social media wishing the team the best of luck yesterday.

“To Shah Firdaus and Fadhil Zonis, as one of your fans, I hope you both make the best use of the experience you have built up for so long in Birmingham,” he said.

“You both have great abilities and if you can use them optimally at the right time and place, God willing, success will belong to you both.”

“To young riders Ridwan (Boi), Anis, Izzah and Aliana, make your first appearance a platform to stand out internationally and learn as much as possible because this is just the beginning for you all.

“I believe they have all prepared well and are in their best form. I hope they will show their true potential and bring home success for their beloved country.”

At the 2018 Games in Gold Coast, Australia, they returned home empty-handed. Shah Firdaus came closest to a medal when he lost to Australia’s Jacob Schmid in the shoot-out for bronze in the sprint.

Josiah Ng is the only cyclist to have won gold. He came out tops in the keirin in New Delhi 2010 after Azizul was penalised for an illegal move. Azizul settled for silver. 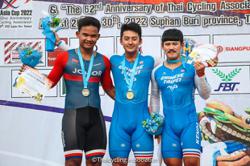