(Reuters) - Julian Alaphilippe will return to competition at the French Championships road race on Sunday, two months after a crash left him with a collapsed lung, broken ribs and a broken shoulder blade, his Quick-Step Alpha Vinyl team said.

World champion Alaphilippe suffered the injuries at the Liege-Bastogne-Liege Monument classic after being caught up in a huge pile-up and falling into a ditch.

Alaphilippe's team mate Remco Evenepoel will headline the QuickStep contingent at the Belgian Championships this weekend.

The 30-year-old Frenchman returned to training on the road last month and said at the time he hoped to participate at the Tour de France, which begins on July 1 in Copenhagen. 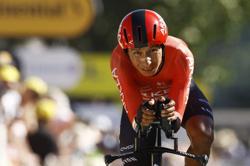