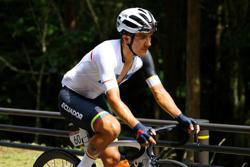 LAVARONE, Italy (Reuters) - Briton Simon Yates dropped out of the Giro d'Italia on Wednesday due to a knee problem, as Santiago Buitrago went on to win on stage 17, a 165-kilometre ride from Ponte di Legno to Lavarone.

After an almighty battle further back, Richard Carapaz of Ineos Grenadiers came home in fifth to retain the pink jersey, crossing the line at the same time as Australian Jai Hindley, who stayed second in the general classification.

Yates, one of the pre-race favourites for the pink jersey and winner of two stages so far, abandoned the Giro altogether, lying 21st in the general classification more than half an hour behind Carapaz before Wednesday's rainy stage.

"Yates' fall on Mount Etna (last week) and subsequent knee problem weighed down on the rider for all following stages of the Giro d'Italia," said BikeExchange-Jayco doctor Matteo Beltemacchi.

"Despite daily therapy and Simon's tenacity, that resulted in a second stage win, the knee pain grew worse and worse, eventually leading to the decision for his retirement from the race."

As Yates dropped out of the running, Dutch pairing Mathieu van der Poel and Gijs Leemreize led the way by a comfortable margin in tough conditions going into the final ascent up Monterovere, before Leemreize pulled clear on the descent.

Colombian Buitrago, who had crashed earlier in the stage, then stormed ahead of the first group of chasers, in front of the peloton, and then breezed past Leemreize to take the first Grand Tour stage victory of his career by 35 seconds for his Bahrain Victorious team.

Carapaz leads the way in the general classification after his impressive effort to lead the peloton home, three seconds ahead of Hindley, with the top two gaining seconds on Mikel Landa in third.

"It's been a really hard stage," Colombian Carapaz said. "I think we're happy -- every day everything is being defined more, everything is clearing up in the rankings and I'm happy to have the jersey another day."

News also came through as the riders battled it out on Wednesday that Eritrean Biniam Girmay has been cleared of any permanent vision damage but he is not yet able to resume training or racing.

Girmay suffered an eye injury when opening the celebratory bottle of Prosecco after winning stage 10 last week. The cork flew out and hit his left eye.

Stage 18 of the Giro d'Italia On Thursday is a 146-kilometre ride from Borgo Valsugana to Treviso. 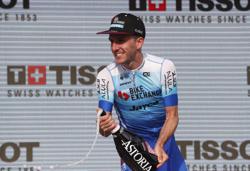 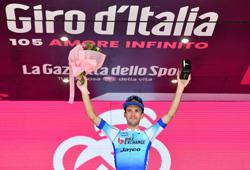