Shah Firdaus did well to reach last 16 in worlds 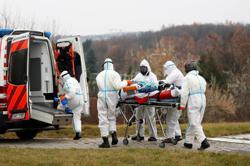 The 25-year-old did well to reach the last 16 of the sprint event before losing to Dutch ace Jeffrey Hoogland in Roubaix, France on Saturday.

Shah Firdaus had qualified for the elimination stage by coming in 11th fastest in the 30-man qualifying round.

He then kept his momentum going by outpacing Martin Cechman of the Czech Republic in the opening last-32 stage to set up a duel with Hoogland.

Shah Firdaus gave his best against Hoogland but was edged out narrowly at the finish line by his in-form rival, who eventually finished runner-up to compatriot Harrie Lavreysen, the reigning Olympic champion.

Hoogland was also the winner of last Friday’s 1km time trial event, reclaiming the title he last won in the 2018.

Reaching the last 16 was a redemption of sorts for Shah Firdaus after failing to impress in the keirin race last Thursday.

It was a commendable effort considering he only had the chance to check out the track two days before the competition started due to the Covid-19 protocols.

The Aussie trainer had recently returned to his country and is under quarantine in Melbourne.