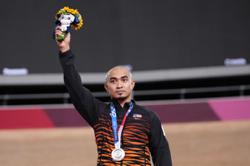 PETALING JAYA: Break the cycle by making a change.

That’s what national track coach John Beasley is hoping for as he wants the UCI, the world governing body for cycling, to review the current system where a decision made by the race commissaire is considered final.

“Humans make mistakes and currently, we do not have a platform to question the decisions made by the race commissaire,” said Beasley.

“It will be good if the UCI can work on a process and put in place a system where the coaches and riders can question a decision.”

Beasley admitted that he was still unhappy with how the men’s keirin final at the Tokyo Olympics last month was handled.

Australia’s Matthew Glaetzer, who was drawn as the second rider behind the derny, left a substantial gap between himself and Britain’s Jason Kenny before the pacer left the track.

It allowed Kenny, who had the luck of the draw to be placed first behind the derny, to attempt a bold move to sprint early and run away with the gold medal.

Malaysia’s Azizulhasni Awang, who was drawn fifth behind the derny, beat the reigning world keirin champion Harrie Lavreysen of Holland to secure the silver.

Malaysian fans later vented their fury on Glaetzer but Beasley stressed that his contention was not against the Australian.

“The rule states that when you are lined up behind the pacer, a rider is not allowed to leave a big gap until the derny leaves the track,” he said.

“And if the gap between the riders is not filled quickly, the race would be stopped. The race would then be restarted after a warning to the rider or riders.

“We were told at the managers’ meeting about it but it was not implemented accordingly during the race.

“I had mixed emotions over the lack of consistency in enforcing the UCI rules.

“As a direct effect of the decision by the commissaire, riders who drew the back of the field had no chance of winning the keirin gold.

“I am not blaming Glaetzer. I believe he just made a massive mistake. It is up to the officials to make the race fair. However, that was clearly not the case in the keirin final,” he added.