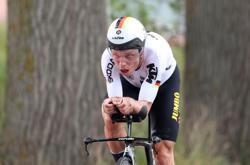 TOKYO (Reuters) - The BMX freestylers soared off the ramps into the Olympic spotlight as the latest new edition to the Games made its debut at the Ariaka Urban Sports Park on Saturday.

"It is so surreal to say that we are all Olympians," Venezuelan rider Daniel Dhers said after the seedings runs to decide the order for Sunday's finals.

Despite the lack of spectators the arena announcer did his best to whip up some atmosphere while music by Puerto Rican rapper blared out.

After the dramatic and crash-riddled conclusion to the BMX racing events the day before, the freestyle action was more "chilled" although just as spectacular.

Given 60 seconds on a park consisting of ramps, spines and walls, riders can do whatever they please, packing in tricks and flips while trying to flow smoothly around the course.

Chile's Macarena Perez Grasset made history as she was the first rider to go - a special moment for a sport established in the 1980s as a spin-off from BMX racing.

The 19-year-old Roberts, who married her wife Kelsey last year, underlined her tag as favourite with two eye-catching rides, to top the scoring ahead of team mate Perris Benegas.

"It was insane," Roberts told reporters. "Dropping in today obviously this week we were just focusing on practice and having fun, but today Natalya Diehm of Australia came up to me and she was like, 'yo, we're Olympians'.

"I don't care what kind of medal or what place I'll get, I am just honoured to be here representing Team USA and I'm gonna thrown down what I can."

Martin, who like Roberts claimed the world title in Montpellier recently, topped the men's charts, reaching giddy heights off the ramps and spicing his runs with the full range of double tailwhips, barspins and even a front flip.

While the seedings runs are an opportunity to shake off some nerves and tidy up some lines, Sunday will be the time for the riders to reveal everything they have up their sleeves.

"I have a new trick that I haven't shown anyone and haven't put it on Instagram so I want to show that one to everyone as soon as possible," said Japan's Rim Nakamura, whose name Rim translates to "wheel of dreams".

Britain's Declan Brooks, bidding to follow the success of Bethany Shriever and Kye Whyte in the BMX racing competition, said to expect the unexpected on Sunday.

"What have I got for tomorrow? Well, I can't tell you exactly what I've got for tomorrow, but you'r going to see a lot more from me," he said after placing seventh on Saturday.