Count on me: Harrif Saleh is the most successful Malaysian cyclist in the history of Le Tour de Langkawi with three Stage wins.

PETALING JAYA: Top national road sprinter Harrif Saleh will shoulder the challenge of ensuring the team return with at least one gold medal from the Vietnam SEA Games in December.

Harrif recently became the first Malaysian road cyclist to win a race in Europe when he came out tops in the Velo Manavgat Grand Prix in Turkey.

The 32-year-old, who rides for Terengganu Cycling Team (TSG), is also the most successful Malaysian cyclist in the history of Le Tour de Langkawi with three Stage wins under his belt.

“We target one gold from the SEA Games this time, hopefully from the men’s criterium race through Harrif.

“If he can race well and is not injured, I think the chances of winning is big, ” said Malaysian National Cycling Federation (MNCF) president Datuk Abu Samah Wahab.

However, the track events were dropped at the 2019 edition in the Philippines and the team could only deliver a bronze through Sheikh Mohd Taslim Shaikh Mohd Raziff from the men’s BMX freestyle event.

Abu Samah added they will now let the national riders from professional teams miss the early phase of the centralised training camp so they can continue training with their respective teams.

“We will use the riders from Malaysian pro outfits - TSG riders for the criterium event and Team Sapura Cycling (TSC) for the individual time trial event.

“Previously, all riders joined centralised training camp and it didn’t produce the result that we hoped for, so we feel we need to change our approach.

“We believe letting the riders continue with their respective training programmes could work better so that there are no more excuses.”

Only road and mountain biking events will be contested in Hanoi this time. 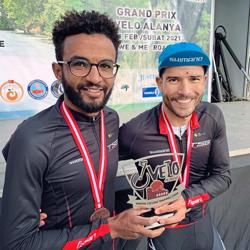