Jakobsen was put in a medically induced coma last August after a collision with Dylan Groenewegen as they sprinted to the finish on the first stage of the race.

The 24-year-old crashed into the barriers and collided with a race official. He was taken to hospital and underwent facial surgery but is now back on his bike.

"He's going to come back at a very high level," former world champion Cavendish said. "Judging by how he's been going over the winter, and the work he's been putting, in I'm pretty confident.

"To see the commitment he's putting in, I'm proud of him."

Cavendish, 35, who has won 30 stages on the Tour de France and is considered one of the best sprinters in the event's history, has not won a race since Feb. 2018 when he prevailed in the third stage of the Dubai Tour. 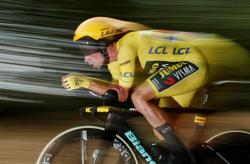