A win to cherish: Shah Firdaus (centre) posing with his gold medal after finishing ahead of teammate Azizulhasni Awang and Australian Ned Pollard at the Victoria Elite Track Championships in Melbourne.

PETALING JAYA: National track cyclist Mohd Shah Firdaus Sahrom served a delightful surprise from Down Under by beating his illustrious teammate Azizulhasni Awang to win the keirin gold at the Victoria Elite Track Championships in Melbourne.

Both Azizul and Shah Firdaus won their opening round heats to book their places in the final.

Azizul had won the individual sprint event ahead of Shah Firdaus at the same meet last weekend.

For Shah Firdaus, the rare win over his senior will serve as a confidence booster ahead of his debut in the Tokyo Olympics in July.

As for Azizul, there is no one better who he will gladly surrender his 100 per cent winning record this year than to his current training partner in the Melbourne base.

While proud of his junior’s success, Azizul stressed that both of them were not at their best form yet.

“I’m not surprised that Shah Firdaus did better than me as he is capable of winning on his own abilities. He is also going through the same training process under coach John Beasley, ” said Azizul.

“But both Shah Firdaus and I are still in the heavy training block, so we were using smaller gears compared to our local rivals who targeted themselves to peak in their own state meet.

“We need to adjust our tactics accordingly when we are on smaller gears.

“It was not an easy race although this is a state meet as Victoria have good cyclists like Sam Gallagher, who is a keirin finalist at the national championships in Brisbane in December while Conor Rowley is a former world junior keirin champion, ” added Azizul, who won the keirin event at the Australian National Track Championships in Brisbane. 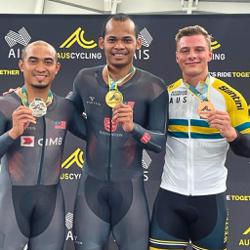