PETALING JAYA: A freak accident has ruined cyclist Azizulhasni Awang’s hopes of helping the sprint team in their chase for Olympic qualification at the Asian Cycling Championships in South Korea from Oct 17-21.

While setting up his bike at his base in Melbourne a few days ago, Azizul’s finger got stuck in the wheel chain and he lost part of his finger tip and had to go for microsurgery.

Azizul is now out of the event but will compete in the individual sprint and keirin at the Asian meet, which is the continental qualification event for the 2020 Tokyo Olympics.

Azizul was supposed to be the starter which comprises Mohd Shah Firdaus Sahrom and Mohd Fadhil Zonis. The trio had claimed the first-ever silver medal for Malaysia at the Indonesia Asian Games last year.

Track head coach John Beasley said Azizul is out of training for a week to recover but is optimistic the rider will be up and running in South Korea.

“His finger is still sore because of the surgery and one of the juniors will replace him as the starter.

“It’s a shame he lost a week’s training but I am not worried as he can catch up.

“Otherwise, preparation is going well. We are not in the best of shape at this point but I’m confident the boys will be ready in two weeks’ time to put up a good show,” said the Australian.

“It’s going to be very hard to get the maximum Olympic qualification points without Azizul but we just have to hope for the best.”

Malaysia must win the gold at the Asian meet to have any chance of qualifying for the Olympics.

Only the top-eight ranked nations by the end of March next year go through.

Qualification for the team sprint is important as it guarantees an additional two slots for the individual keirin and sprint.

Malaysia are currently ranked 15th in the team sprint.

The last time Malaysia had representation in the event was at the 2008 Beijing Olympics when Azizul, Josiah Ng and Rizal Tisin finished seventh overall.

Azizul is the defending champion in the sprint at the Asian meet. 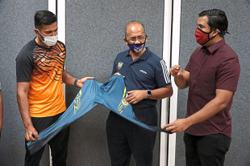 Azizul welcomes incentive from home state as he prepares for Olympics