No Raya at home, no biggie for Azizulhasni

Malaysia's Azizulhasni Awang (left) going up against a Japanese cyclist in the men's sprint event at the Incheon Asian Games in South Korea last year. - Filepic

PETALING JAYA: Cyclist Azizulhasni Awang is giving the Hari Raya celebrations a miss this weekend even as the rest of his Melbourne-based team-mates have returned home.

But Azizul, whose wife is due to give birth to their second child soon, does not mind making the sacrifice as he prepares for the second phase of the Olympic qualifying period in October.

The points earned from these three competitions and the Track World Championships in London next March 2-6 will determine the top 16 field for the keirin and sprint for the Rio de Janeiro Olympics.

A series of good performances this year has given hope to the 27-year-old rider from Terengganu to bag his first World Cup medal in four years.

His last World Cup medal was the keirin bronze he earned in the final round in Manchester in 2011. That, however, was overshadowed by an incident during the final when a 20cm shard of Siberian pine came off the velodrome and pierced him in the calf.

Four out of the six riders were involved in the crash, but Azizul showed courageous spirit to remount his bike and cross the finish line in third place.

“I probably won’t be back home until after the Rio Olympics in August next year ... but it’s okay as my wife is here and I can take care of her until she delivers in September,” said Azizul.

“The next two months will be about improving my fitness and racing tactics. I’ll slowly take it up until the World Cup meets.

“It’s getting harder for the 2016 Olympic qualification. We need to race in the UCI Class 1 track meets to have enough ranking points to qualify for the World Cup competitions. It’s through the World Cup meets that we get the points to qualify for the Track World Championships,” said Azizul, who bagged a bronze in keirin at this year’s world meet in Paris in February.

Last Saturday, he clocked a phenomenal 10.396 from the outside lap to win the keirin title at the Japan Track Cup II in Shuzenji, Shizuoka.

“The world meet this year gave me the belief that I can challenge the world’s best again. I hope to get back to the form I was in before the calf injury in 2011 for the Rio Olympics,” said Azizul, who will compete in the China Track Cup I and II in Beijing at the end of this month. 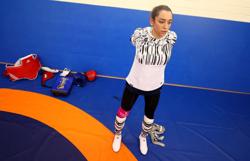