(Reuters) - India's captain Rohit Sharma may miss their test match against England starting on Friday after he tested positive for COVID-19, but the team will take a late call on his inclusion after his next COVID test, head coach Rahul Dravid said on Wednesday.

Sharma tested positive during a warm-up match in Leicester last week and the question of who leads the side in his absence has been left hanging, with vice-captain KL Rahul not in the squad due to an injury.

India were 2-1 ahead in the series last September when the final test at Old Trafford was cancelled due to COVID-19 cases in their camp. The fifth test will be played in Edgbaston from Friday.

"We'll keep monitoring him (Sharma). We've got close to 36 hours to go. He'll have a test later tonight and one tomorrow as well. It's up to the medical team to decide," Dravid told reporters.

"We haven't had a chance to see him as he's in quarantine."

Dravid did not say whether fast bowler Jasprit Bumrah would lead the side if Sharma was unavailable, saying the Indian cricket board would make a decision. Mayank Agarwal was added to the squad as cover for Sharma on Monday.

Sharma's potential exclusion could complicate India's decision-making when picking the playing 11, but Dravid said they would finalise the lineup only after they have seen the pitch the day before the game.

Virat Kohli's form has also been a cause for concern, with the former captain last hitting a century nearly three years ago. But Dravid said the 33-year-old was "ticking all the right boxes" to come out of his slump.

"I would say he's on the right side of 30," Dravid said with a smile. "He's an incredibly fit guy, he's one of the most hardworking guys I've come across.

"We want match-winning contributions from him, even if it's 50 or 60 (runs). There's not a lot of focus on three figures." 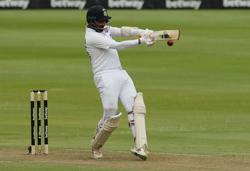