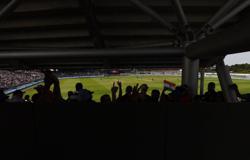 (Reuters) - Aaron Finch has paid tribute to Sri Lankan cricket fans after they turned Colombo's largest stadium yellow on Friday night to thank Australia for touring the country despite the economic crisis.

Sri Lanka is in the midst of its worst financial crisis since independence in 1948, forcing the island nation's population to endure power cuts, shortages and months of sometimes violent protests.

Finch captained the tourists in three Twenty 20 and five one-day internationals on Australia's first tour of the country since 2016, leading his side to a consolation victory in the final ODI on Friday.

"We're very grateful that we've been able to tour here. We know the difficulties that Sri Lanka has faced in recent times," he told reporters.

"Hopefully over these eight white-ball games we've been able to provide some joy to people in the country."

Thousands of local fans donned the yellow that the Australia team wears in limited overs cricket as they flocked to the R. Premadasa Stadium on Friday after a social media campaign called on them to pay tribute to the tourists.

"It was outstanding, the Sri Lankan people are wonderful people," Finch added.

"The support that they provide is second to none. They are great cricket supporters, it's not just constant noise, they ride the emotions of the game. When Sri Lanka are up and about, that's as loud as anywhere you'll visit in the world."

Australia won the Twenty 20 series 2-1 before Sri Lanka hit back with a 3-2 triumph in the ODIs. The tour concludes with two test matches in Galle starting next week.