(Reuters) - Kane Williamson will join up with New Zealand's squad in England in the coming days after the captain and his wife Sarah Raheem welcomed their second child into the world.

Williamson posted a picture of the new baby boy with mum and daughter Maggie on social media, writing: "Welcome to the whānau little man!"

Williamson left the Indian Premier League early to return home for the birth and will now join the Black Caps in England in the lead-up to the first test at Lord's on June 2.

Batsman Devon Conway and seamer Tim Southee have already linked up with the squad after their IPL teams failed to make the playoffs.

Williamson, fast bowler Neil Wagner and batsman Daryl Mitchell are expected to arrive on Wednesday, on the eve of the second tour match against a Counties XI team in Essex.

Days one and four of the first match against Sussex were rained out, but stand-in skipper Tom Latham was happy he and three team mates found time to post half-centuries.

"I think it was a really valuable couple of days for us here, especially from a bowling point of view -- that competitive nature of bowling in a game rather than in the nets -- and I think the batsmen got that as well from the match intensity," he said.

Selectors named Ollie Robinson in the Counties' 12-man squad, giving the England paceman a chance to impress ahead of the Lord's opener.

Robinson has struggled since suffering a back spasm in the fifth Ashes test in Hobart in January.

He suffered another back spasm in a warmup match in the Caribbean in March and missed the entire three-test series against the West Indies.

Test opener Dom Sibley, who has fallen out of favour since last year's home series against India, joins Robinson in the Counties squad. 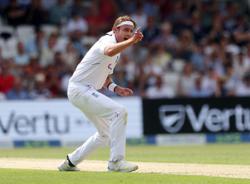