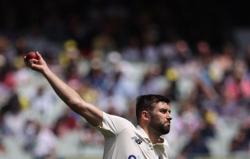 MELBOURNE (Reuters) - Australia's Pat Cummins will contact Tim Paine before the Ashes opener on Wednesday seeking some late inspiration ahead of the fast bowler's debut as captain against England at the Gabba.

Paine, who resigned from the captaincy over a 'sexting' scandal last month, led Australia to their first retention of the urn in England for nearly 20 years at the drawn 2019 series.

Cummins said he had a number of chats with Paine about leading the team since the wicketkeeper stepped away from the game on a mental health break, and would continue to do so.

"Yeah, it’s been good to chat. He still obviously wishes he was up here and part of it all but he needs to be home," Cummins told reporters on Tuesday.

"I’ll probably give him another call this arvo (afternoon) and keep leaning on him for different ideas on how to work with our players. He’s got great experience.

Having been vice-captain under Paine, Cummins takes the reins of the team earlier than expected and said his promotion had yet to fully sink in.

He said he was trying to pick out some of the winning qualities of a number of Australia's recent test captains.

"It's almost crazy being the 47th men's test captain," he added.

"The lineage of Paine, Smithy, Ricky Ponting, Michael Clarke, Steve Waugh -- they're legends of the game that I grew up watching.

"Steve Waugh was with us in the Ashes last time. He was great, how simple he kept things.

"Michael Clarke made me feel 10 feet tall when I walked out to bowl, even if I didn't feel like I was super-confident. Ricky Ponting is a great people person.

"Again, it hasn't probably hit me yet. It's great." 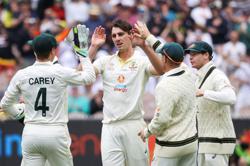 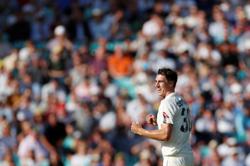