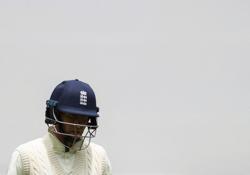 LONDON (Reuters) - England's prime strike bowler James Anderson has nothing left to prove as he prepares for what will surely be his last Ashes series Down Under starting next month but he may feel there is some unfinished business to attend to against Australia.

The 39-year-old Lancastrian is already the most prolific fast bowler in Test history with 632 wickets to his name and there are few better sights in world cricket than Anderson tormenting batsmen with his trademark swinging deliveries.

In eight previous Ashes campaigns he has bagged 104 wickets, more than against any other country apart from India, and when England were thumped 4-0 by Australia in 2017-18 Anderson was still his side's leading wicket-taker with 17.

England's hopes of snatching back the Ashes in 2019, however, were dealt a crushing blow when Anderson limped out of the first Test at Edgbaston and played no further part in a series which ended 2-2 with Australia retaining the urn.

Australian opener Steve Smith went on to dominate that series, scoring a total of 774 runs at an average of 110.

So it is no surprise that the duel between Anderson and Smith could have a crucial bearing on the outcome.

"As a bowler you always look at the best player and for me over the last three, four or five years Steve Smith's been Australia's best player," Anderson told Fox Cricket's Road to the Ashes podcast. "He's been their go-to in the last few years, so he'll be the one that we will be keen to get out early."

Anderson's classic side-on style and control of a Dukes cricket ball -- his weapon of choice -- has made him deadly on seamer-friendly English grounds on which he has taken 402 wickets at an average of 24.

By comparison his Test record on tour is 208 at an average of 31 while his wickets in Australia cost on average 35 runs.

But the Aussies will not see Anderson as any less of a threat on hard and bouncy home wickets, as he proved in 2010-11 when his series-leading 24 wickets went a long way to sealing England's first series win Down Under since 1986-87.

Anderson has come a long way since his early Test career when on his day he was sensational, but when things were not quite in sync he could be terrible.

These days England captain Joe Root knows that whatever the conditions he can throw the ball to Anderson who will make something happen.

Crucially, Anderson has developed the patience of a polar bear waiting for a seal to appear in a hole in the ice.

"Bowling in Australia is not necessarily more difficult, it's just different," Anderson said.

"You're not going to get much swing with a Kookaburra, so it's just about trying to hit good areas. You've just got to be relentless and so accurate."

As the first test at the Gabba looms on Dec. 8, England might want to wrap Anderson in cotton wool, because without him firing on all cylinders it might be a long Tour.