MUMBAI (Reuters) - New Zealand are confident they can pull off an upset win against hosts India in the second and final test in Mumbai to complete a historic series victory, the team's leading spinner Ajaz Patel said on Wednesday.

Mumbai-born Patel, whose parents immigrated to New Zealand in 1996, kept his side in the hunt for a series win after sharing a last-wicket stand with debutant Rachin Ravindra in the first test to see out the final 52 balls for a thrilling draw.

It meant the reigning world test champions, who have never won a test series in India let alone a test match since the 1988/89 tour, have arrived in Mumbai brimming with confidence.

"For us, it's still going into a game with the possibility of taking the series and we know the history around playing cricket in India, we know how difficult it has been in the past," Patel told reporters.

"The beauty about this team at the moment is we don't really look at history too much. We look at the present.

"We have the sense of self-belief that we can cause upsets anywhere and we've done that recently to kind of be able to take the World Test Championship."

Both teams were forced to cancel their training sessions on Wednesday due to unseasonal rain and Patel said his team mates would not mind an extra day's rest.

The 33-year-old left-arm spinner, who expects a lot of family members in the stands during the test, said adapting to the Wankhede Stadium pitch will be the key for New Zealand.

"I guess the red clay has a bit more bounce and pace," said Patel, who has rolled his arm over at a few practice sessions in the past at the stadium for the Indian Premier League side Mumbai Indians.

"We've just got to assess the wicket that's given to us and how it's responding, and we've got to set up a game plan according to that now.

"The beauty about Indian conditions is that you have to adapt very quickly and we know how good these guys are at playing spin, how adept they are in their home conditions. So it is a great challenge and something we look forward to." 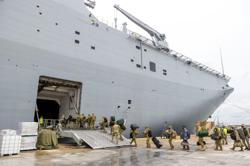