(Reuters) - Afghanistan supporters donning national colours gathered in Sharjah to cheer on the team, who opened their Twenty20 World Cup campaign with a commanding 130-run win over Scotland L4N2RL3BB on Monday.

Afghanistan's top order fired their side to an imposing 190-4 in their opening Super 12 stage match before spin duo Mujeeb Ur Rahman (5-20) and Rashid Khan (4-9) then combined to skittle Scotland for 60 runs in 10.2 overs.

Groups of fans decked out in black, red and green carried the country's flag to show their support for the national side amid uncertainty surrounding their country's status as a full international member after the tournament.

The team's remarkable rise has been cricket's biggest fairytale story in recent times but Afghanistan risk isolation following the country's takeover by the Taliban in August.

The International Cricket Council (ICC) will meet next month to determine the sport's future in Afghanistan under the Taliban, while Cricket Australia has already threatened to scrap next month's one-off test if women are not allowed to play cricket.

Afghanistan will next take on Pakistan, who beat India by 10 wickets L4N2RK07W at the weekend, in their second group game in Dubai on Friday. 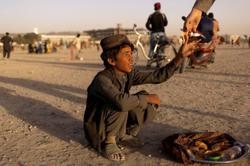 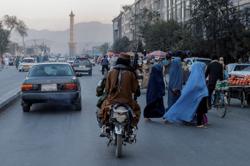