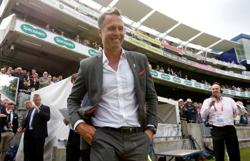 LONDON (Reuters) - England's defeat in The Oval test against India not only exposed deficiencies in their game but also proved they are not battle-hardened or ruthlessness enough, former captains Michael Vaughan and Nasser Hussain said.

Joe Root's men held the upper hand in the fourth test after bowling out India for 191 and grabbing a 99-run first-innings lead.

But chasing 368 for victory on a flat track, England went from cruising at 100 for no loss to unravelling in the final day's post-lunch session, succumbing to a 157-run defeat.

"For years we beat Australia and India in our conditions, but now we are struggling," former captain Vaughan wrote in the Daily Telegraph.

"England have to work on how to become more battle-hardened when the pressure is on."

They let India off the hook in the first innings when the tourists were 127-7 but went on to post 191. The touring side made amends in the second innings by racking up a series-high 466.

"They lack pace and variation to make things happen in flat conditions. This test team are dependent on the pitch helping them," Vaughan said of the English attack.

He was more critical of the batsmen and said England's 290 in the first innings was sub-par for batting-friendly conditions.

"England do not make enough runs when it is flat and played poor strokes through lapses in concentration," he rued.

The hosts were sloppy in the field too, spilling six catches in the match, which irked Hussain.

"Their catching has been shaky for a while now, and they can't keep having to create 26 chances in each test because the blokes in the slips are dropping too many," he wrote in the Daily Mail.

"What they'll have learned from this game is that a lack of ruthlessness earlier in the game can come back to haunt you.

"The mistakes seem small at the time, but they all add up. It's up to England to eradicate them." 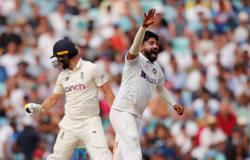