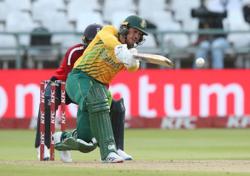 (Reuters) - South Africa captain Temba Bavuma hit 72 runs and the bowlers then restricted Ireland as the visitors won by 49 runs to complete a clean sweep of their three-match Twenty20 international series in Belfast on Saturday.

South Africa won the opener in Dublin on Monday by 33 runs and sealed a 42-run victory in the second match three days later, also at Belfast.

The visitors, who won the toss and elected to bat, were without key players Quinton de Kock, Lungi Ngidi and Tabraiz Shamsi, who were among the five players rested for the match.

Skipper Bavuma and Reeza Hendricks (69 runs) put up a 127-run opening wicket partnership to lead South Africa to a strong start before David Miller wrapped up with an unbeaten 36 off 17 balls to set a mighty target of 190.

But Balbirnie (27) was trapped lbw by left-arm spinner George Linde (2-21), while seamers Wiaan Mulder (2-10) and Lizaad Williams (2-30) also troubled Ireland as the hosts crumbled under pressure and finished on 140 for nine.

(Reporting by Manasi Pathak in Bengaluru; Editing by Edmund Blair)