(Reuters) - Justin Langer has addressed players' concerns about his coaching style "head on" and has the full backing of the Australia team, limited-overs captain Aaron Finch said on Thursday.

Reports of dressing-room unrest surfaced after Australia were beaten 2-1 at home by an injury-ravaged India in January.

The players took part in an end-of-season review with leadership consultant Tim Ford and Finch said Langer had cleared the air before flying with the team to West Indies.

"For 'JL' to address some issues that came up in the review with Tim Ford, I think that was brilliant," Finch said from St Lucia.

"No doubt it was confronting for him at the time but he took it head on and addressed that.

"He's done a fantastic job and the way he confronted that - and the way it was received by the players - was outstanding.

"It shows the quality of the man he is - (there are) things that he's working on and we're all behind him."

Langer had described the situation as a "wake-up call" and Finch said the stress of playing cricket in bio-secure 'bubbles' had further complicated matters.

"There was a combination of a few things," Finch said.

"On the back a lot of bubbles as well, he could have used his assistants a bit better and delegated a bit more."

Michael Di Venuto and Jeff Vaughan were appointed assistant coaches of the team on Thursday ahead of a busy summer which includes the Twenty20 World Cup, a title that has eluded Australia, and an Ashes series against England. 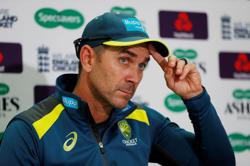