(Reuters) - New Zealand's most successful test wicketkeeper BJ Watling will retire from all forms of cricket after their upcoming tour of England, the country's cricket board (NZC) said on Wednesday.

Watling, 35, has been an integral part of New Zealand's test team since debuting in 2009, and holds the Black Caps' record for test dismissals with 249 catches (excluding 10 as a fielder) and eight stumpings.

Watling, who also represented New Zealand in 28 one-day internationals and five Twenty20s, said the time had come to hang up his gloves as he looks forward to spending more time with his family.

"It's been a huge honour to represent New Zealand and in particular wear the test baggy," Watling said in a statement. "Test cricket really is the pinnacle of the game and I've loved every minute of being out there in the whites with the boys.

"I've played with some great players and made many good mates. I've also had plenty of help along the way for which I’ll always be grateful.

"Although I've had to make this announcement ahead of the tour to England, my focus is very much on the three tests ahead and preparing to perform in them."

New Zealand coach Gary Stead paid tribute to Watling's grit and determination that helped him forge a career as one of the country's finest glovemen.

"The records speak for themselves and he's been such a crucial cog in the test team’s rise over the past decade," Stead said.

"The attitude and fight he brings to every day and every session of a test is what has made him such a valued member of the Black Caps." 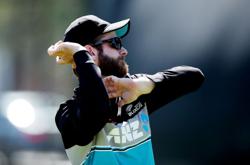