Marsh, who made his IPL debut in 2010 has played a total of 21 games, made himself unavailable for the 2021 season starting next month due to personal reasons.

He was ruled out of the 2020 campaign after Sunrisers' first match due to an ankle injury and was replaced by West Indies' Jason Holder.

The IPL said that Roy was acquired by Sunrisers for his base price of 20 million Indian rupees ($273,332).

Roy had opted out of the Delhi Capitals' 2020 campaign for personal reasons. He has played a total of eight IPL matches scoring 179 runs including a half-century.

He scored 144 runs in the five-match Twenty20 series against India earlier this month before making 115 runs in three one-day internationals against the same opponents. 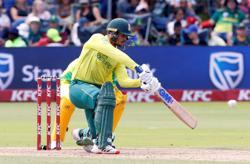